LINCOLN, Nebraska, USA, April 7, 2020 – Every morning, Nebraska’s public health and emergency response directors begin the day by reviewing a dashboard showing the number of COVID-19 diagnoses and deaths, as well as counties with more vulnerable populations. With a click, Nebraska’s pandemic response leaders can see each hospital and its number of beds, the location of dialysis centers, long term care facilities, and pharmacies; the name of the emergency response coordinator; and how many electricity-dependent Medicare beneficiaries are in each county.

Developed by Babak Jalalzadeh-Fard, PhD, postdoctoral research associate at University of Nebraska Medical Center and Jesse E. Bell, PhD, Claire Hubbard Professor of Health and Environment at the University of Nebraska Medical Center’s College of Public Health and Faculty Fellow of the Daugherty Water for Food Global Institute, the dashboard began as a way to map vulnerable populations and health care resources throughout Nebraska.

“I pulled together a team of people from UNMC [the University of Nebraska Medical Center] and the University of Nebraska-Lincoln to try to understand the impacts of weather and climate extremes on human health,” said Bell. “We received funding through the Nebraska Research Initiative to understand things like flooding, heat waves and droughts and the potential health impacts they have on Nebraska.”

Bell said he wanted to create a social vulnerability map similar to one he helped develop when he worked for the Centers for Disease Control and Prevention (CDC). “When I was at the CDC, we did some social vulnerability mapping for extreme heat events,” he said. “I also did some work looking at a fungal infection in the southwest region of the United State known as Valley fever. So, I thought to use that kind of approach to develop a dashboard for Nebraska.”

With funding and a team of researchers from the University of Nebraska, Bell began to work on the project in early fall 2019. “We needed a postdoctoral researcher to help with this work. It took us a little while to fill that position. We found Dr. Babak Fard. He has a background in engineering with extensive experience in programming and data science and worked on vulnerability to heatwaves. He did his PhD at Northeastern University up in the Boston area. I hired him in November.”

“As COVID-19 was spreading and we were seeing more and more cases, I pulled Dr. Fard aside and said we should look at vulnerability mapping for the populations that are most susceptible here in Nebraska,” Bell explained. “It [COVID-19] was taking hold in places like Italy and New York and the time to prepare and act is sooner than later. Since we were already pulling together health data for floods and droughts, let’s see if we can do this so that health departments and healthcare facilities can have easy access to information they need.”

Bell and his team collaborated with the CDC and Nebraska health care providers to collect the data, which Dr. Fard added to the dashboard in an easily navigated layout.

Rachel Lookadoo, JD, another UNMC professor working on the project, connected the research team with federal, state and local health departments. “We are sharing the dashboard with them and getting it into their hands so they can use it for preparedness planning and response efforts, as well,” said Bell.

Bell said this dashboard is the only one he is aware of with this level of detail. “Right now we’re seeing anywhere between 600 to more than 1000 clicks on this site a day. The leads of the ASPR Region VII grant and the HHS Region VII health administrator reached out to me, asking to expand the data to include the rest of the region, which includes Kansas, Iowa and Missouri.”

“Hopefully, at some point, COVID-19 will go away, but there will always be something else to face,” Bell added. “For any type of disaster, this dashboard would be really beneficial. I think state health departments would like to have it as a capability in-house, so they can keep it updated with their local area information.”

The expanded COVID-19 dashboard, including data for Nebraska, Kansas, Iowa and Missouri, is expected to be released by the week of April 12. 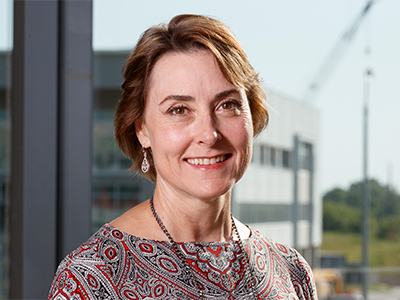 A new method to treat one of Nebraska’s biggest water challenges may come from an unexpectedly small source: algae.

Peter G. McCornick, who has led the Daugherty Water for Food Global Institute as executive director since 2016, has been reappointed for a second five-year term.