Note: The University of Nebraska–Lincoln's Water for Food Global SEEDS student learning community, hosted by the Daugherty Water for Food Global Institute, is focused on professional development in entrepreneurship, agriculture and sustainable development. As part of their studies, students visited Rwanda in Summer 2019 to research agriculture entrepreneurship models. The following is one of several guest posts from students' about their experiences.

Rwanda is a central east African country nicknamed the land of a thousand hills — but is also home to thousands of cows and the pastures that feed them. A new practice introduced by an innovative Rwandan farmer may be key to increasing the amount of milk a farmer can produce by irrigating pasture land.

As a young child growing up in Rwanda, a noontime nap was not negotiable. In order to get her children to take one, my mother would offer a walk and a small piece of candy to us as a reward. On these frequent walks, my favorite part was visiting a familiar herd of cows in the valley. The owner of the cows sold the milk to his neighbors and was well-respected within the community. Historically, cows are a highly-valued commodity in Rwanda and have brought prestige to their owners. They have also signified love, unity and wealth. During a traditional wedding, cows were given to the bride’s family as a dowry. After the cow had given birth, the calf was then given to a neighbor — a sign of unity to live peacefully and help one’s neighbor.

In the Nyagatare district in the eastern part of the country, a farmer named Muhoza recently came up with the idea to buy a large plot of pasture land in which to irrigate. This was my first time hearing about a Rwandan farmer irrigating his pasture and to my knowledge, he’s one of the first to try it. Growing up, I saw cows grazing down by the valley – they used to wander in the road, creating unsafe conditions until the government made a policy banning free grazing. While this kept the community safer, it reduced the area available for cows to graze.

Muhoza studied his irrigation idea and presented it to the Rwanda Agriculture and Animal Resources Development Board (RAB). They granted him a subsidy, offering to pay 50% of the costs associated with running his business, including irrigation equipment. He was also given seven hydrants and three rain guns from the government for irrigation purposes and a water permit to use the surface water near his fields for free. Muhoza’s field is seven hectares long. He plants four different crops – mostly perennials – and secures his seeds from both RAB (for free) and Kenyan Seeds Company (for a fee). Muhoza employs six permanent workers and 15-20 temporary workers according to the season.

The availability of cow’s milk has allowed the Nyagatare district to completely eliminate malnutrition in the community. However, the district is among the lowest in terms of production of agricultural products. By irrigating pasture, there is an opportunity to add another revenue stream in the form of cattle feed to its economy and increase the standard of living in the area.

Two months after starting to irrigate his pasture, Muhoza has seen little measurable improvement, but it’s still too early to see if his risks will pay off. Muhoza did say that from the day his began irrigating, milk production from his cows has slightly increased. Plus, he is able to sell parts of the new foliage to other farmers since he currently owns just 26 cows. Muhoza hopes that after one year, his income will increase because he will be able to buy and support more cows and supply more milk. 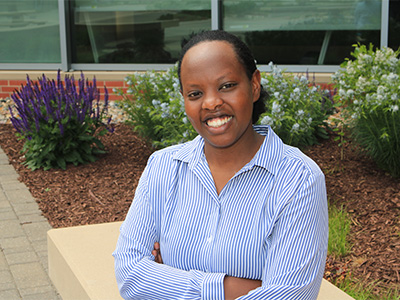 Scaling of smallholder irrigation in Rwanda key to food security

At just over 25,000 square kilometers (10,000 square miles), Rwanda is one of the smallest countries in the African continent. Despite its history of conflict and genocide, Rwanda is now working toward innovation, security and stabilization, led in part by its government’s strategic initiatives.

Africa’s groundwater reserves are about 100 times greater than its annual supply of renewable surface freshwater.

There are high concerns about the disinterest and low-participation by youths in the agriculture sector in Africa.