By 2050 we’ll need to produce and provide food and water for nearly 10 billion people, many of whom will live in some of the world’s poorest, most water short, albeit fastest growing, regions. In sub-Saharan Africa, where the population is set to double in this timeframe, many countries have set goals to increase agricultural production to meet national food demands. Delivering on these goals will require increased water use, either from better utilizing rainfall or some form of irrigation. Achieving these goals is especially challenging in sub-Saharan Africa, where efforts to date have often been disappointing, with yields and water productivity stubbornly low. That said, there has been encouraging water and agricultural progress in recent years in Rwanda, Ethiopia, Morocco and elsewhere.

In the United States, agricultural water management continues to evolve, with solutions addressing specific local conditions. In the case of Nebraska, which is relatively rich in natural resources, including the Ogallala Aquifer and the Platte River, and usually sufficient rainfall in the eastern portion of the state, it has carefully managed its water resources through localized governance agencies (Natural Resources Districts) and taken advantage of center-pivot irrigation systems to become one of the most highly productive agricultural states in the US. Tapping into the expertise of the University of Nebraska’s faculty, the state is cultivating the next generation of researchers, water managers, agricultural producers and industry leaders. The state also benefits from investments in infrastructure, including ready access to roads, energy, equipment, financing, storage and markets.

The US leads the world in research, development and application of technology, information, and successful agricultural management practices. Important new innovations, such as the development of Variable Rate Irrigation Center Pivots, offer opportunities for increased water and agricultural productivity. Also, investments in crop and livestock systems research have improved water productivity. Recent studies by the Daugherty Water for Food Global Institute and partners have revealed quite dramatic improvements in the water productivity of major crops (i.e. corn and soybeans), and livestock products.

As has been demonstrated in Nebraska, while the specifics depend on the context, managing water for a highly-productive agricultural economy requires financially viable farms supported by an enabling environment, including support from private enterprises. Arguably the most important investment to achieve highly productive agriculture is in people, including producers, entrepreneurs in the input and output markets, the next generation of water managers, and research and knowledge management specialists. Other critical areas of investment are increasing access to financial resources; supporting infrastructure, specifically roads, electricity, communications, and storage and processing facilities; developing impactful agricultural research, including emphasis on behavior change; implementing viable policies on import and trade; and catalyzing the innovation of technologies and practices.

The history of publicly funded irrigation systems in many parts of the developing world, particularly in sub-Saharan Africa, has been discouraging, both in terms of execution and performance. This did lead to a decline in such investments, but with the need to address food security there has been has been a renewed interest over the past decade. An important qualification is the need to focus more broadly than just large scale-publicly managed systems, to invest in the enabling environment for sustainable irrigated agriculture.

There are a wide range of water management technologies, practices, and approaches available to smallholder farmers, including drip and micro-sprinklers, center pivots, solar pumps, treadle pumps, soil-moisture probes, and an ever-growing plethora of apps. Improved agricultural practices include reduced or minimum tillage, conservation agriculture, other soil-water management practices, and agronomic techniques, such as planting rates, which were an important aspect of the improved water productivity in the case of Nebraska.

Most technologies have proven to be effective in one context or another, but many have failed when introduced in other locations. As USAID’s Rob Bertram shared at the Water for Food Global Conference, solar pumps represent a “leapfrogging technology” for irrigation and livestock, and even a little water can be transformative in a community. But we must not “blow this.” Without understanding the socio-economic drivers, behavior change, land rights and other institutions, financial viability, and other facets necessary for scaling sustainably, our interventions may prove ineffective, and we will be risking “disaster.” 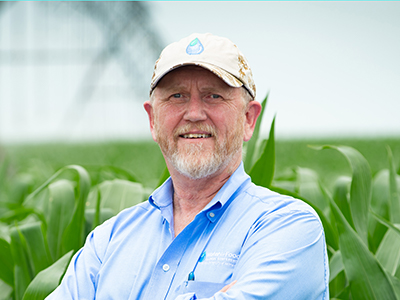