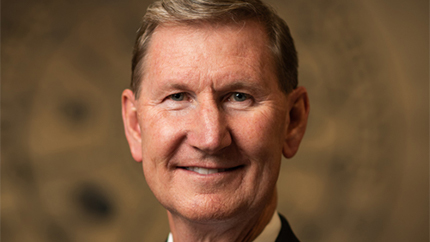 Board Chair; President of the University of Nebraska

Walter “Ted” Carter, Jr., began his tenure as the eighth president of the University of Nebraska system on Jan. 1, 2020. The Board of Regents appointed Carter following a national search that engaged hundreds of Nebraskans within the University and across the state.

Carter is the immediate past superintendent of his alma mater, the U.S. Naval Academy in Annapolis, Md., where he served from 2014 to 2019. As superintendent – the Naval Academy’s equivalent of a university president – Carter oversaw all functions of the institution, including leadership of 4,400 students and 1,500 faculty and staff, management of a $500 million budget, and oversight of academics, facilities, admissions and policy.

Under his leadership, the Naval Academy’s Class of 2019 achieved a record-high graduation rate of 90% and the academy was ranked the nation’s No. 1 public university by Forbes Magazine. Carter significantly advanced diversity and inclusion; white men are no longer the majority of the student body for the first time in the academy’s 173-year history. He also formed the nation’s first accredited cyber operations major and accredited a nuclear engineering
major.

Prior to joining the Naval Academy, Carter was president of the U.S. Naval War College in Newport, R.I., from 2013 to 2014, where he led 1,600 resident students, 100,000-plus distance education students and 600 faculty and staff in graduate-level education.

Carter earned his bachelor’s degree in physics and oceanography from the U.S. Naval Academy. He holds educational credentials from the 18-month-long Navy Nuclear Power School, the U.S. Air Force War College, the Naval War College and the Armed Forces Staff College. He is a naval flight officer with more than 6,300 flying hours, and has completed 2,016 carrier-arrested landings, an American record.

Carter is a Distinguished Flying Cross and Bronze Star recipient. He graduated from the Navy Fighter Weapons School (Top Gun) in Miramar, Calif., and was commander for the Carrier Strike Group Twelve, in which he commanded 20 ships, two nuclear-powered aircraft carriers and two carrier air wings that were deployed to Afghanistan in the Arabian Gulf.

The son of an English teacher, Carter was raised in Burrillville, R.I., a rural town in the northwest corner of the state. He and his wife, Lynda, have two adult children.