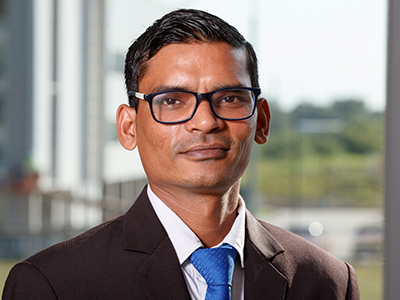 Jahangeer is a postdoctoral fellow at the Nebraska Water Center in Lincoln, where he models contaminant transport in groundwater. He first participated in this type of contaminant transport modeling a few years ago as a Ph.D. student in his native India. He received his undergraduate degree in biotechnology from Sardar Vallabh Bhai Patel (SBVP) University of Agriculture and Technology located in his hometown of Meerut, India. He then completed a master’s degree in environmental engineering at the National Institute of Foundry and Forge Technology (NIFFT) in Ranchi, India. In 2017, Jahangeer received a WARI fellowship – a joint program between India and the University of Nebraska that provides fellowships to students and early-career professionals in the water sector. As a WARI fellow, he came to Nebraska to study nitrate transportation modeling and land management scenarios designed to minimize contamination. His work as a WARI fellow sparked a collaboration with NWC director Chittaranjan Ray and Water Sciences Lab (WSL) director Dan Snow, ultimately leading to his return to Nebraska and UNL as a postdoctoral fellow in June of 2018. He currently works on a project in Hastings, Nebraska, that involves nitrate contamination in groundwater. For that project, Jahangeer uses modeling skills to generate various scenarios addressing groundwater problems. In addition, he works on other WSL projects, including the calculation of soil water properties in a variety of regions. Jahangeer said he enjoys working hard and developing his research for varied water-related purposes. He believes Nebraskans and other Americans are successful because they are hardworking, driven and committed to their work, and he aspires to do the same. He wants to publish as many projects as he can now to pave the way to becoming a hydrology professor in the future.